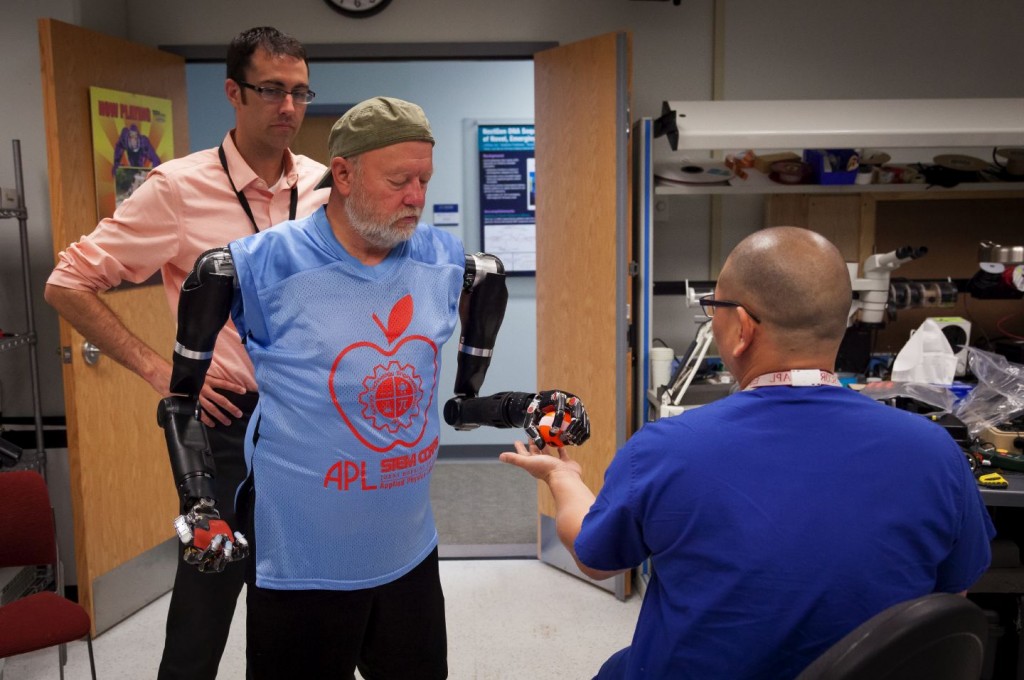 When I read this article on the future oriented technology blog ‚Serious Wonders’, this image brought me back in time, weird enough. You have to know that my dad was an orthopedic technician, and we were brought up with all kind of prosthetics that he made for his patients. I remember him explaining us how he hoped in the far future to be able to have the technology to make real robotic prosthetics, to be controlled by the mind, like a real arm or leg does. We were impressed by only the thought of it but could not imagine that this would be possible ever.

But here it is, only 20 years after the talks with my dad. In ‚Serious Wonders’ they introduce a man,  a shoulder-level double amputee, who can control his prosthetics via his mind.

Researchers at the John Hopkins University Applied Physics Laboratory (APL) fitted him with a limb system that allows him to control his left and right arm prosthetic at the same time.

Les Baugh, who lost both arms in an electrical accident 40 years ago, is able to operate the system by simply thinking about moving his limbs, performing a variety of tasks during a short training period. Before putting the limb system through the paces, Baugh had to undergo a surgery known as targeted muscle re-innervation. The next step is to send Baugh home with a pair of limb systems so that he can see how they integrate with his everyday life.

How great is that? I whish my dad could have seen this. For me this story is proof of the fact that the world is preparing for tremendous technological innovations, we hardly can imagine. The future has arrived, as the guys behind ‚serious wonders’ say. O yes.

The Applied Physics Laboratory, a not-for-profit division of The Johns Hopkins University, meets critical national challenges through the innovative application of science and technology. For more information, visit www.jhuapl.edu.