I don’t know what happened lately, but the trend of being more honest, real and transparent is also liberating an ‘old’ but very dominating taboo, the one of menstruation.
Sure we all know it’s blue (if we believe the advertising agencies) but times are changing.
First of all in advertising land itself.

Is it thanks to a bold, brave client (and a staff part female leaders perhaps) who insisted to cut the crap and sow things as they are?

Well this is certainly the case with this campaign.

HelloFlo, a US based tampon subscription service became famous for defying the ad norms around feminine hygiene (no mysterious blue liquid pouring from a glass beaker into a maxi-pad here).
It started with this long-form spot called ‘The Camp Gyno’ that is full of great lines and comic visuals, as it tells the amusing story of a pre-teen girl who’s the first to get her period at summer camp, and who uses that milestone to become popular—despotic, even—as she dispenses products and advice almost like she’s dealing drugs. With this kind of ads HelloFlo wants to be a brand with an open personality that embraces the topic and doesn’t tip-toe around the delicate subject matter.

It did not end there. After the groundbreaking Camp Gyo spot HelloFlo released other ads like the one called ‘First Moon Party’ or their latest ‘Aunt Flo’.

Playing off the phrase “Aunt Flo’s in town”—code for “I have my period,” the spot brings Aunt Flo to life (dressed in red, obviously). Instead of fresh-faced tweens staring down their first periods, the new spot seeks broader appeal—highlighting a girl waiting to get her first period, a woman kissing it goodbye with the advent of menopause, and a couple who experience the anxiety that comes with Aunt Flo showing up six days late.

It’s about time we showed and normalized the confusing stuff, too,” Naama Bloom, (female!) founder of HelloFlo, tells Adweek. “One of our most popular articles is about vaginal discharge! This spot is definitely ambitious for us, as we’ve used these vignettes to showcase transitions in women’s lives.”

Not only HelloFlo wants to normalize the conversation about women’s bodies.
This underwear company goes even further.

Thinx brings period proof underwear that protects you from leaks and keeps you dry all day. No tampons anymore, no pads. And they seem to work miracles watching hundreds of super positive press & blogger testimonials around this revolutionary product.
(Why haven’t we heard about them, for God’s sake?)

Not only they invented a true breakthrough product for woman (It was about time this sector came with some innovation!), but also their ads are stunning, refreshing and far from the typical ‘feminine hygiene’ communication. Super hip print ads where girls, panties and open blood oranges play a role.
And yes, again, Thinx was designed by woman in NY (and made by woman in Sri Lanka). 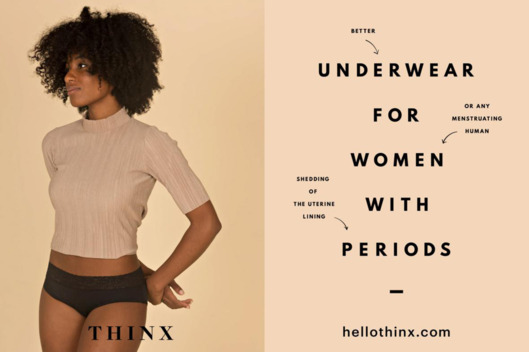 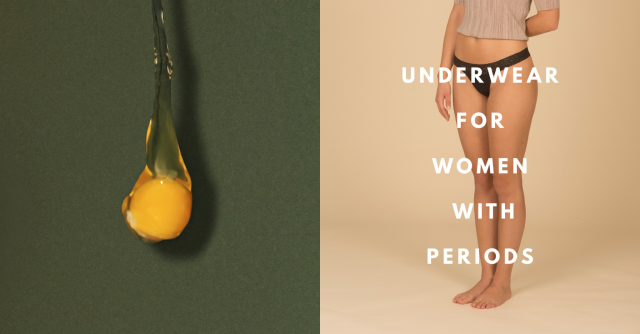 Because, let’s face it, we haven’t had a new invention on ‘feminine hygiene’ since the 1970s. Although supermarket aisles have endless rows of pads and brightly-packaged tampon packets suggesting that women have just as many options for sanitary products as they do for their beauty regimes – enough to create a £10 billion market. But woman know better.
The only three options they have is this holy trinity: pads, tampons and menstrual cups. That’s it.

Secondly I see the huge change of tone-of-voice in female hygiene ads and communication.
Fun and liberating at least and maybe a sign of more and more honest communication, finding is way to the critical, truth-seeking consumer.