As you all know I visit every year Milan Design Week to sense the new vibes, not only on design & art level but also the new shops, the international crowd, the food, the resto’s… Enfin a yearly energy boost.

I also check out with friends, get together and by doing so you sometimes arrive in a hidden gem that’s worth talking about to you guys. Leen Hilde is a friend who lives in Milan for several years, has a Milan boyfriend and kids there, so we can say she’s a local. We wanted to see each other so we agreed to have coffee at NONOSTANTEMARRAS, the flagship & headquarters of artist & fashion designer Antonio Marras. Not your average shop, not a mainstream collection. But what a great garden (with flower shop and lunch terrace), and what a great poetic shop. Check it out for yourself. The images speak for themselves. When in Milan, Antonio Marras NONOSTANTEMARRAS shop is a must go.

For Milan Design Week, the Nonostante Marras space hosted a light installation, the outcome of many years’ research by the designer into the ties between art, fashion, light and space, as well as the result of a chance encounter with Fernando and Humberto Campana. Their Organelle are luminous creations that occupied the exhibition space and gracefully animate 80 underskirts. In a display combining theatrical staging, exhibition design and artistic performance, these suspended garments animate the luminous cones, entities veiled with a soft and delicate light. 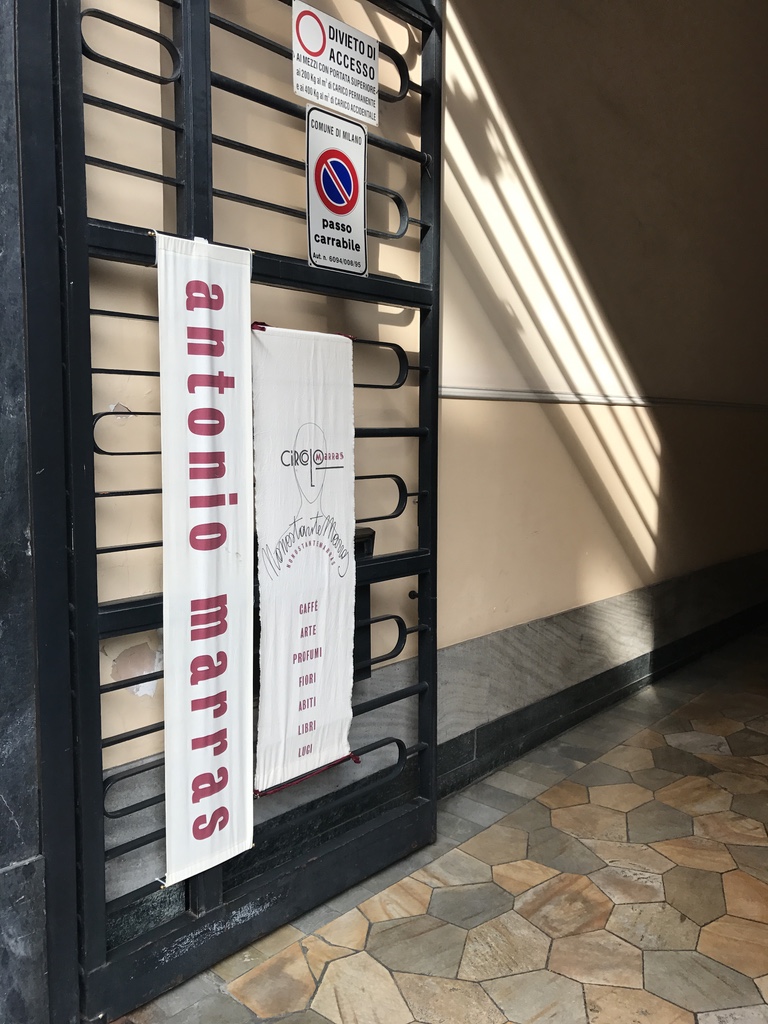 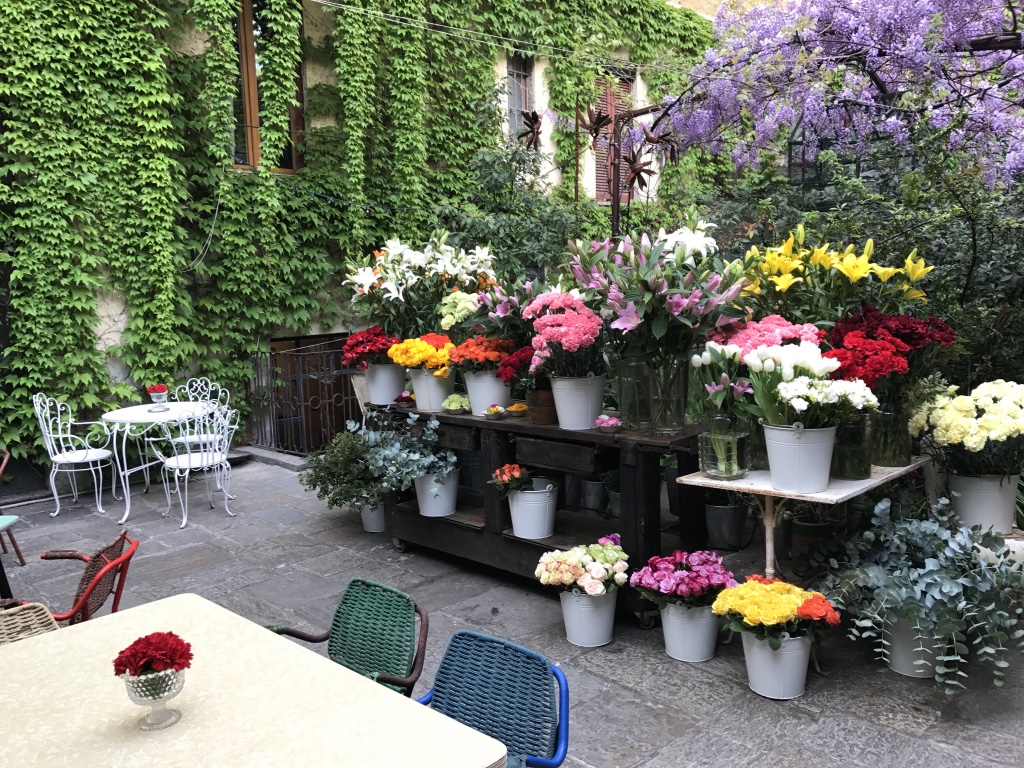 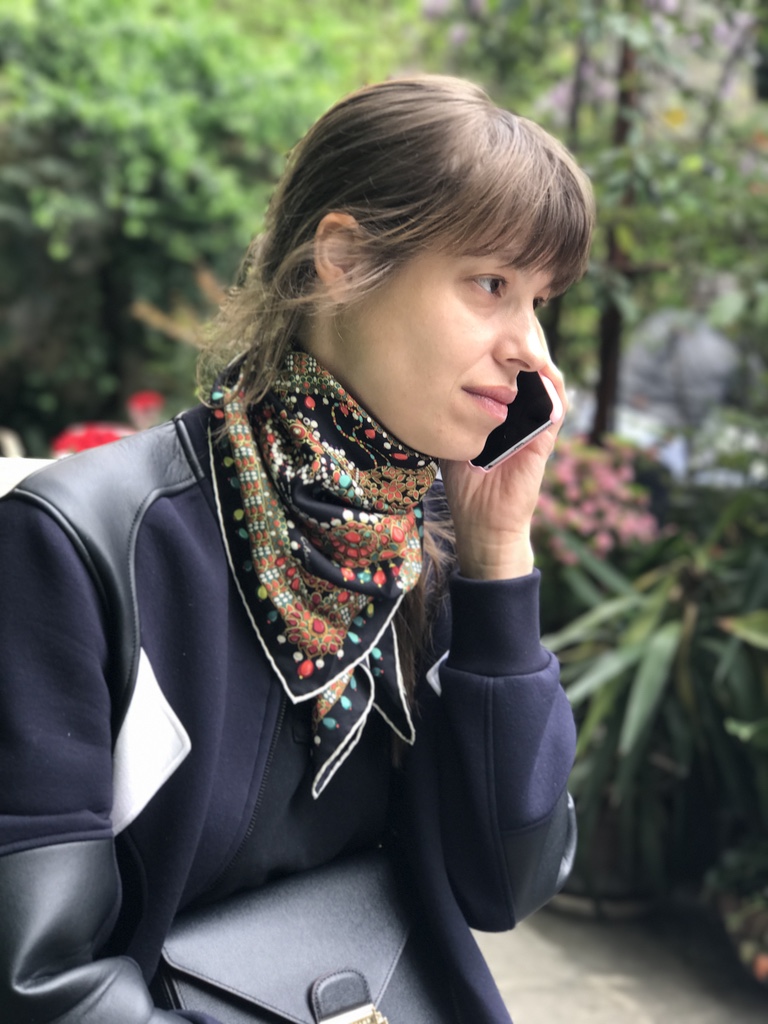 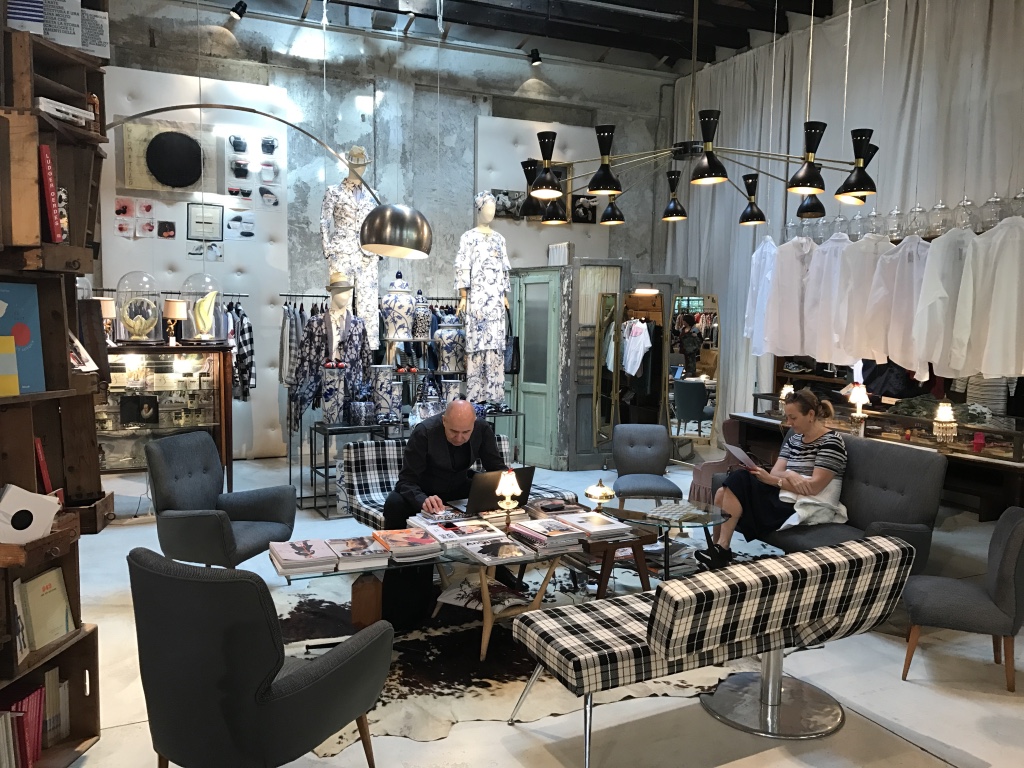 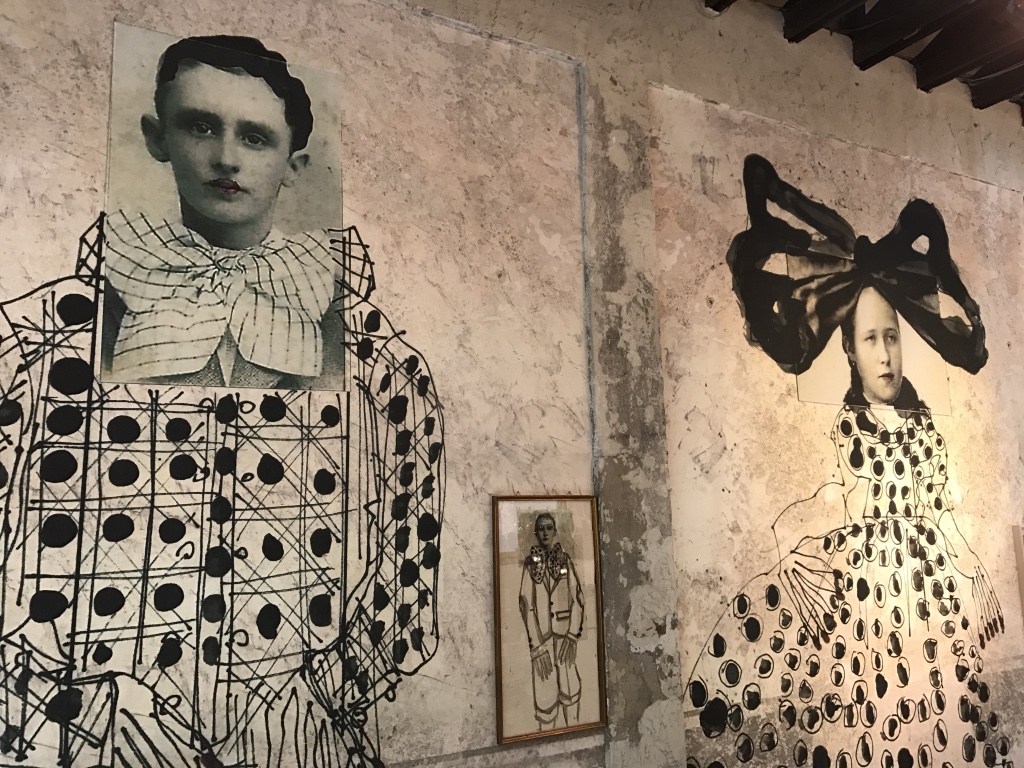 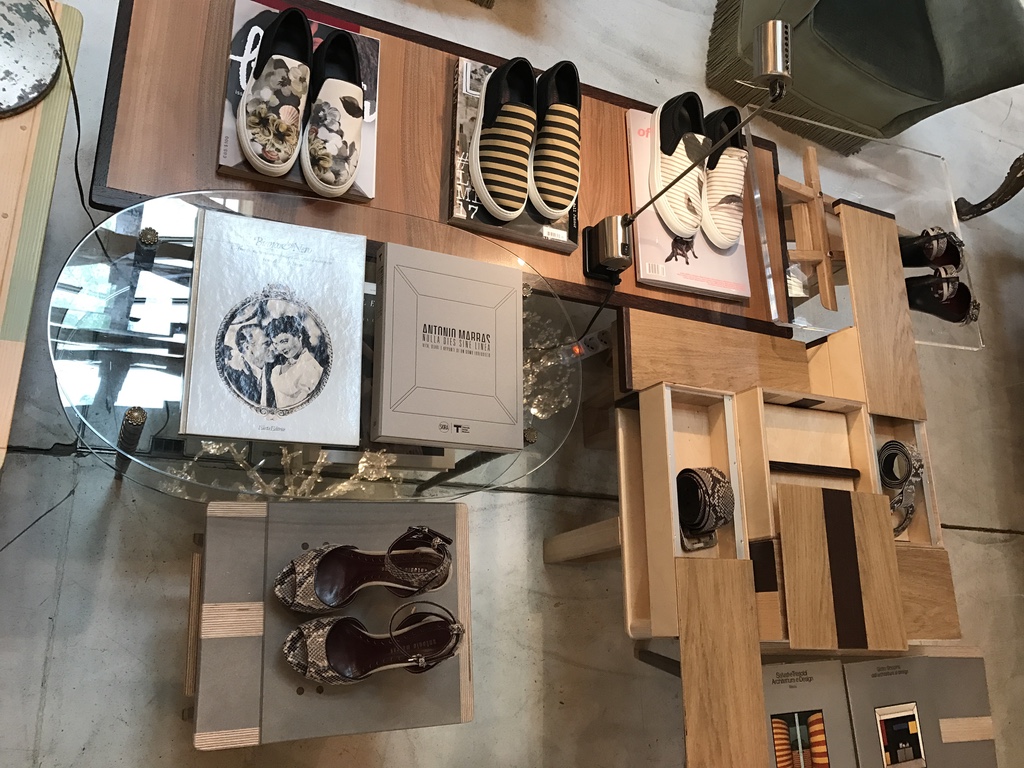 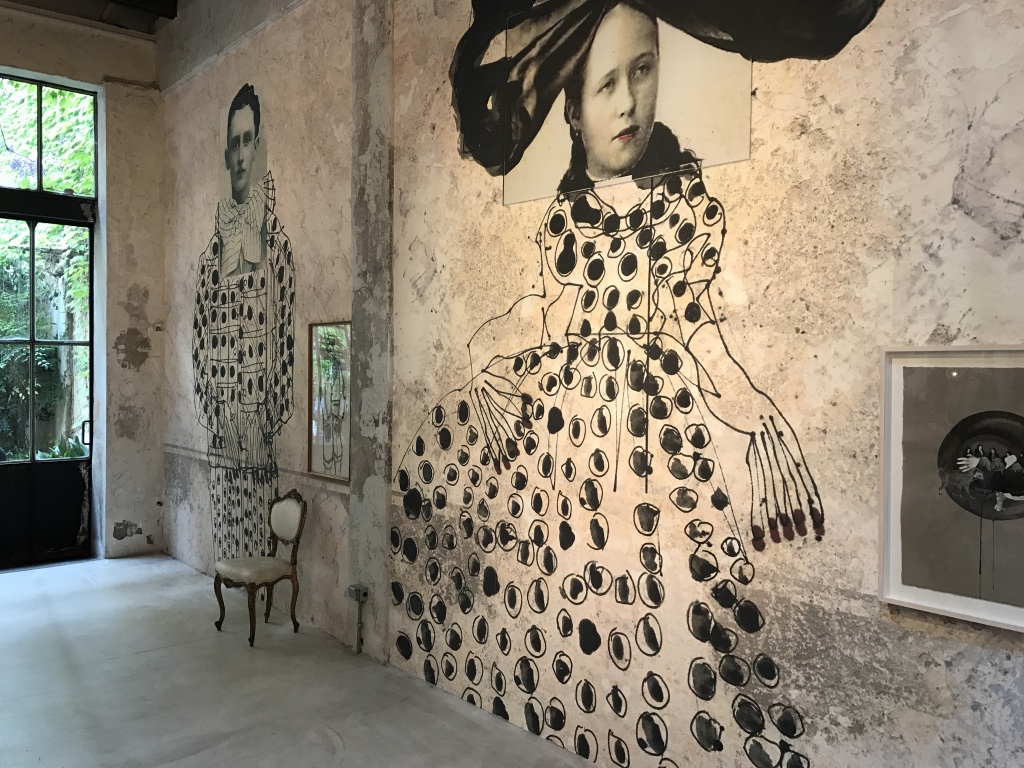 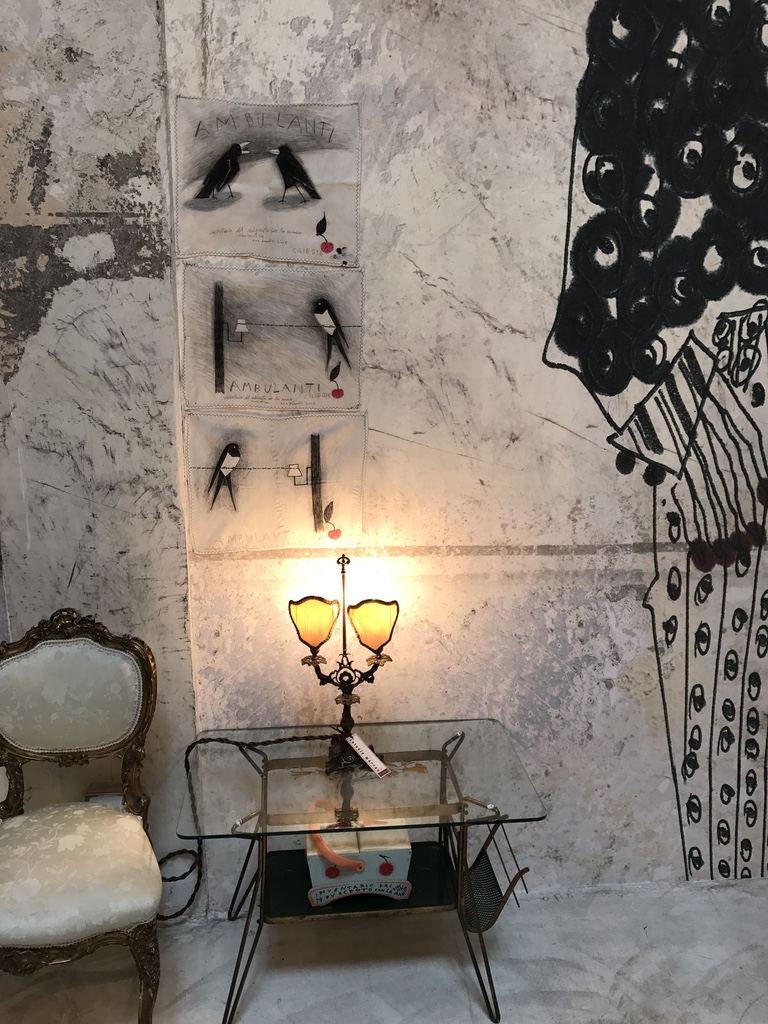 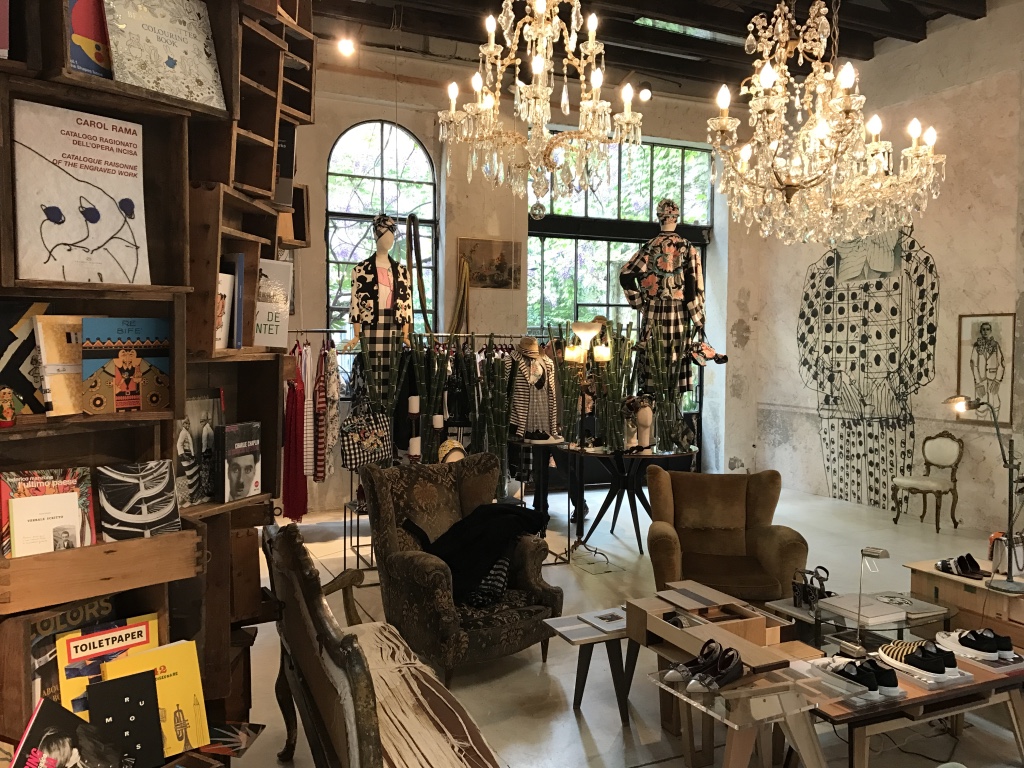 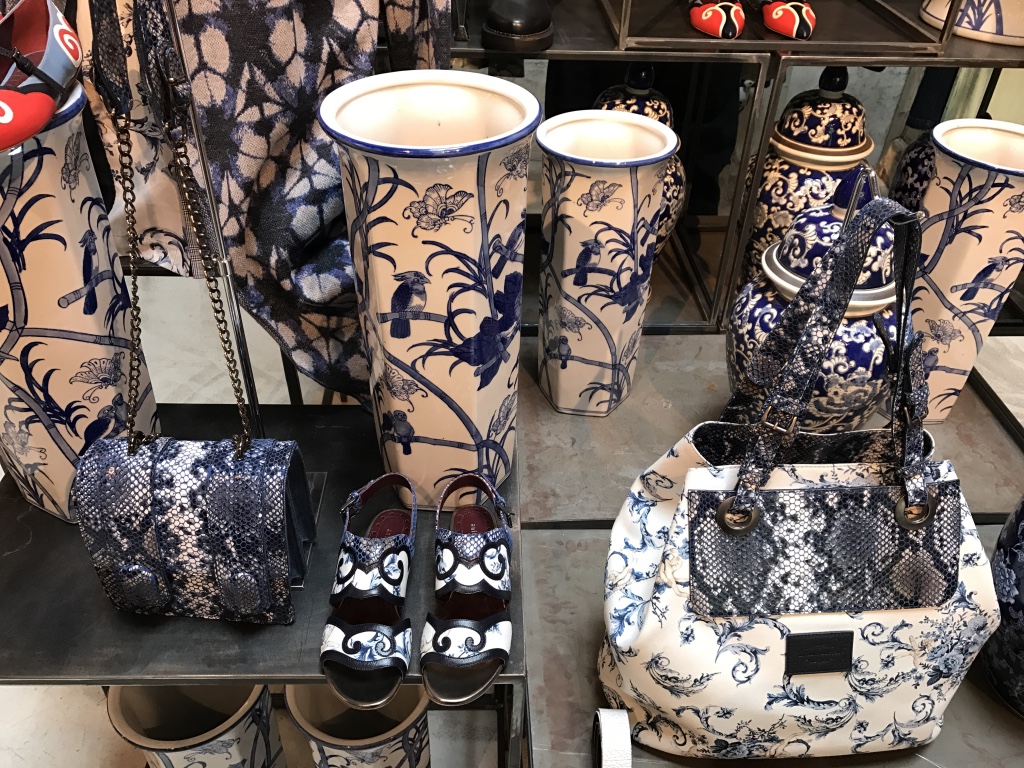 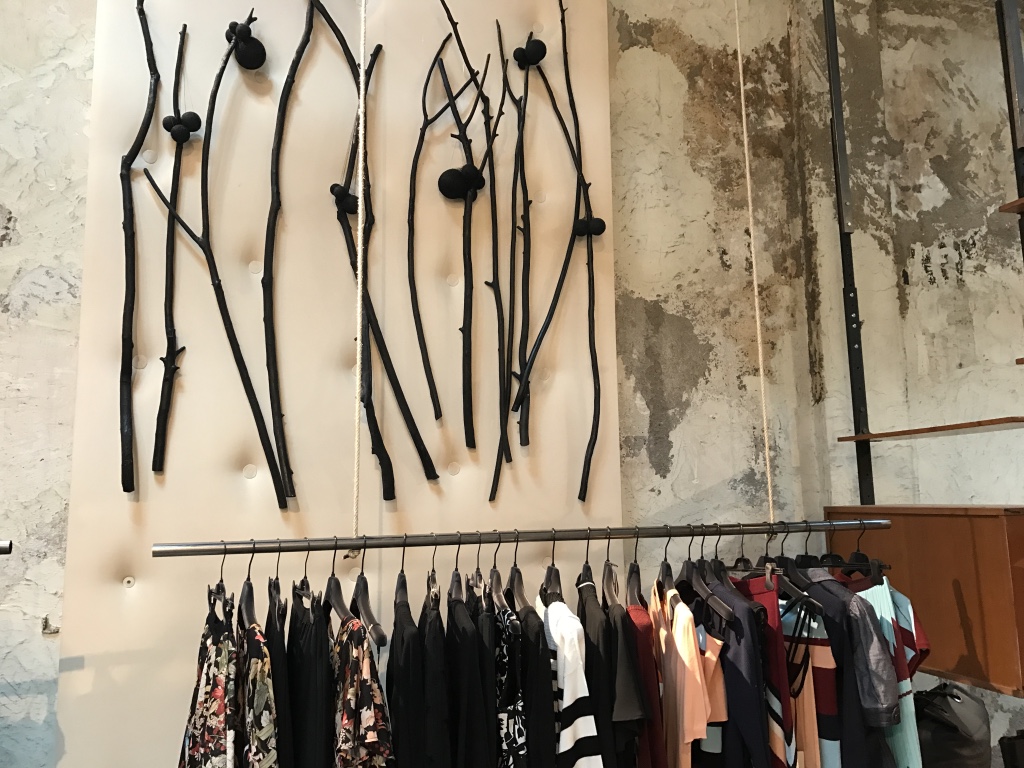 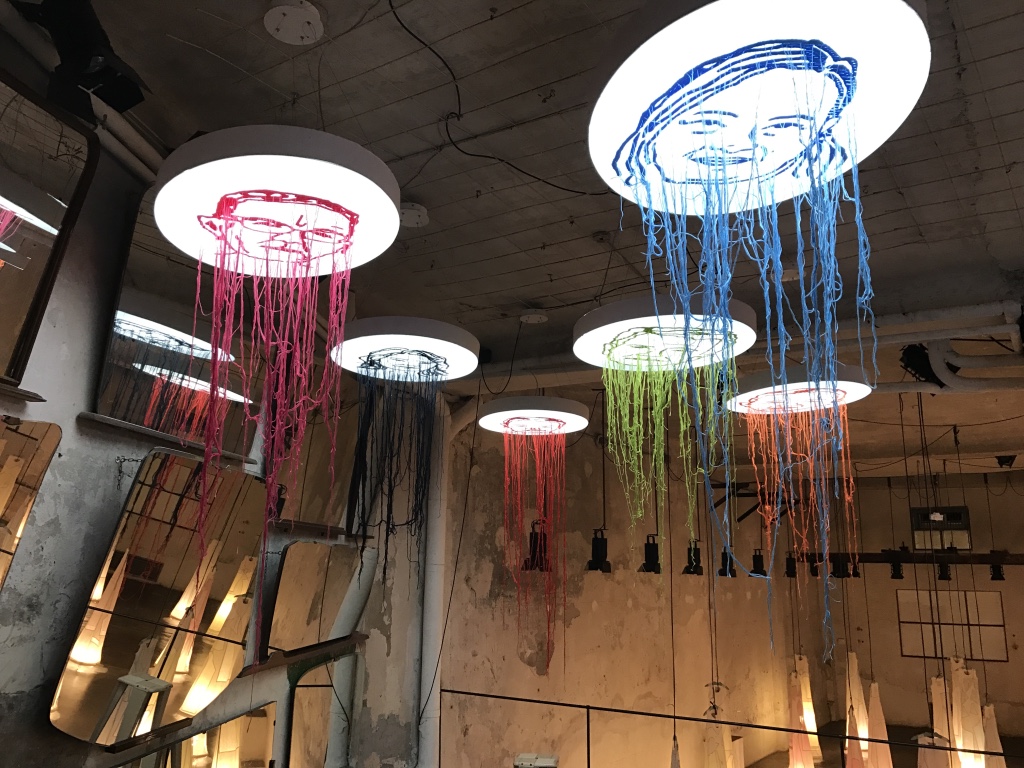 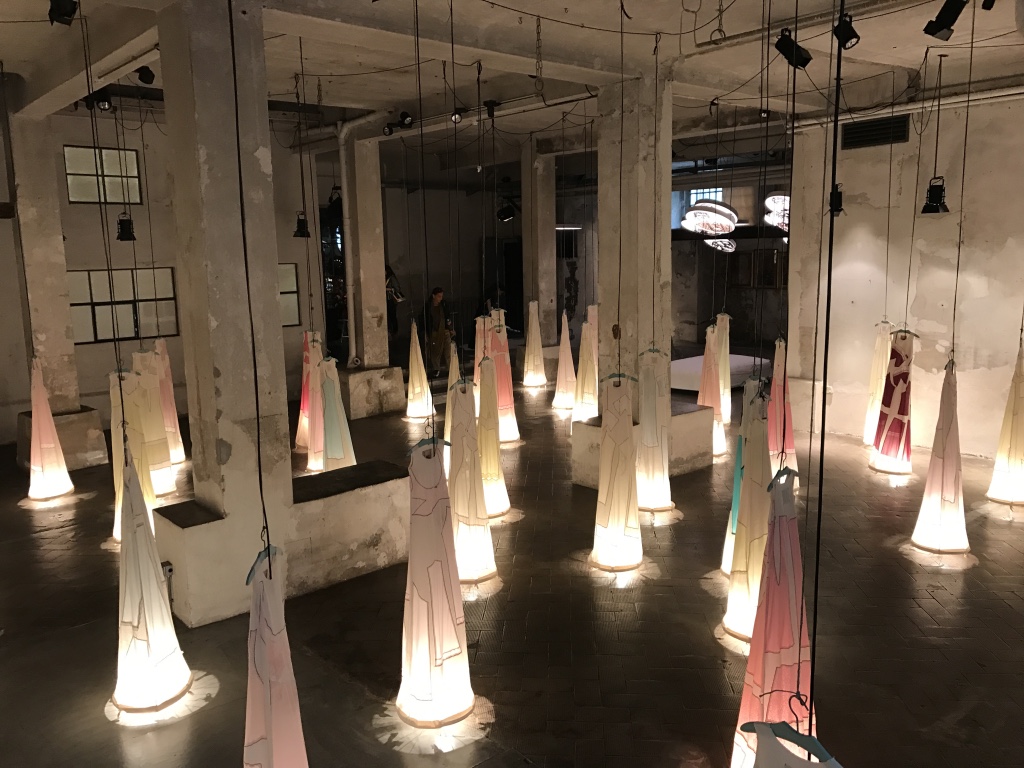 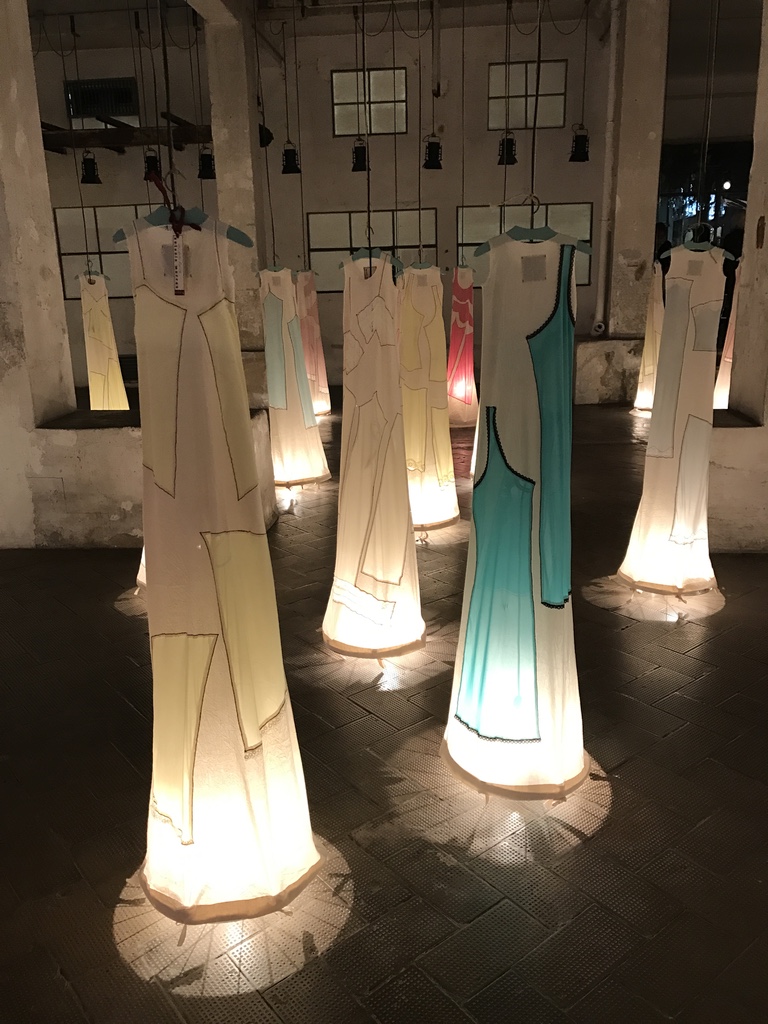 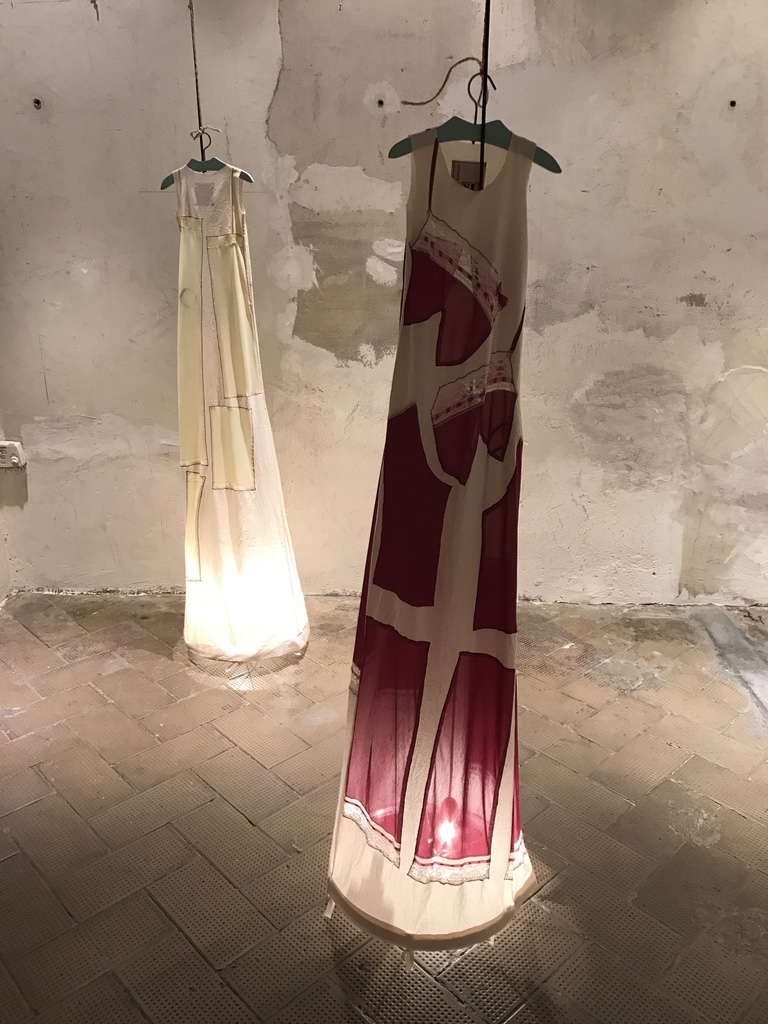 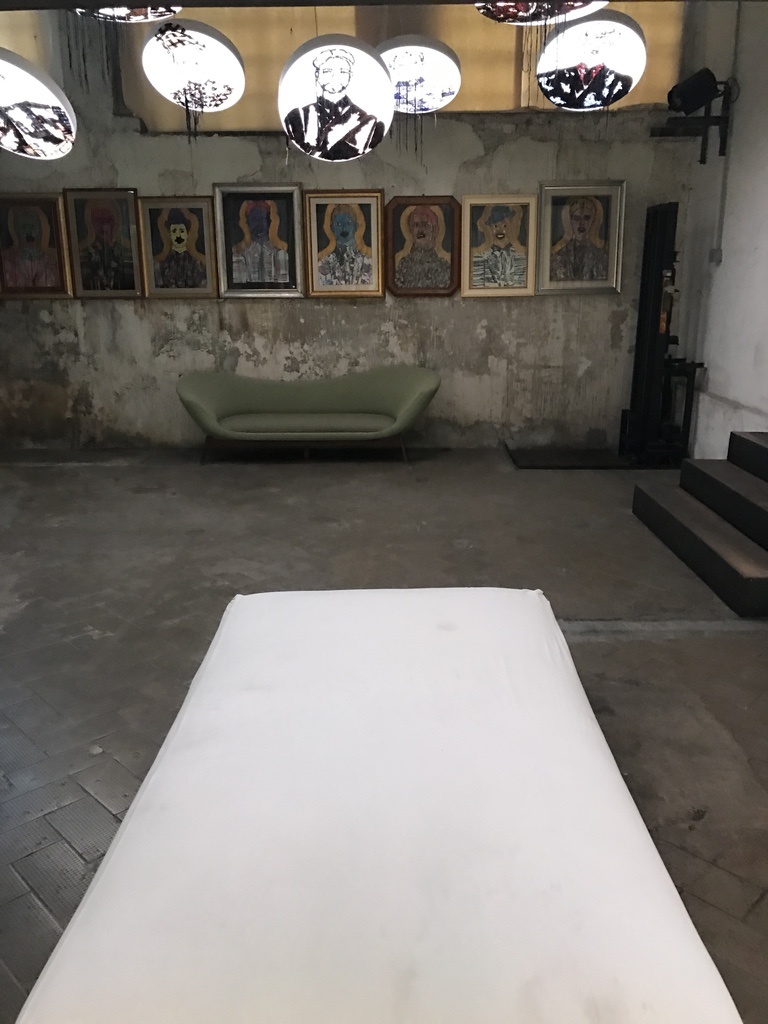 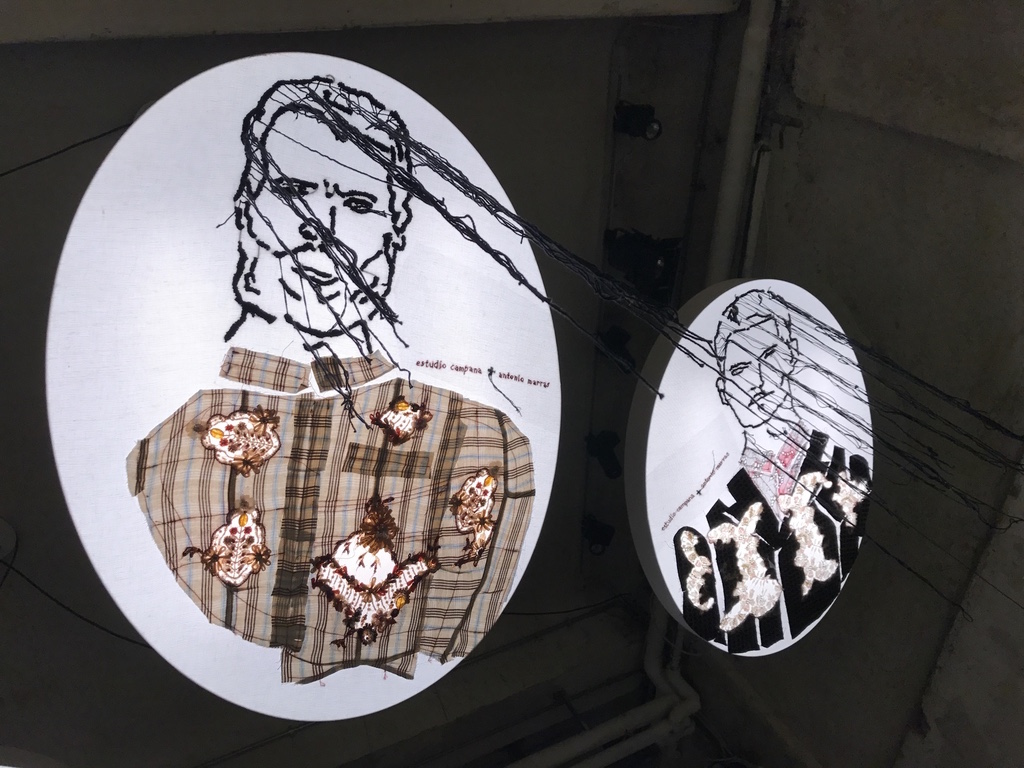 Antonio Marras was born in Alghero, on Sardinia. In 1996 he was asked to present an haute couture show in Rome. The key elements of his style were already clear to see: the focus on craft techniques; Sardinia as a source of inspiration that is never reduced to folkloristic kitsch; the recurring theme of the ligazzio rubio (which in the Sardinian language means a “red thread”), which becomes a fully-fledged hallmark of his style. There’s always a theme, red threads. Then the taste for elegant contrasts: burn marks on luxury fabrics, distressed gauzes and sumptuous embroidery, visible seams and brocades together with a perception of modernity, richly decorative elements on vintage clothes, mixtures of rich and poor, male and female, decoration and structure, form and function.

In parallel with the collections, he continues to experiment through his Laboratorio and Serie Limitata ranges: not quite prêt-à-porter, not quite couture. Clothes made by hand in the Alghero designer’s big homestudioworkshop. Clothes that retain the allure of authenticity because only a few pieces exist and, at the same time, they may serve as the starting point for models included in the first line. Antonio establishes his headquarters in his NONOSTANTEMARRAS shop in Milan.