The moment I got the news that Banksy was about to open an entertainment park, (one that is not) near his hometown Bristol, I knew that I wanted to be there. With any means.
But as expected, we were not alone. From the first second the website was online, he crashed, due to 6 million hits from all over the world. You would crash for less, no?

Our planning began, as we decided to take the car, get on the Eurotunnel, a car-train under the channel, to drive another 3 hours to this weird little coast village, called Weston-Super-Mare. (Very cool name by the way.)

The quest for tickets started. (A Banksy show at Bristol city museum in 2009 attracted more than 300,000 visitors over 12 weeks, so we knew it was not going to be easy to get in). One week after the opening week, the site was back on line and the hunt kicked off. 3 hours later, we had 4 most desired tickets for an evening session, and the day after, 4 for the day session. Yes! 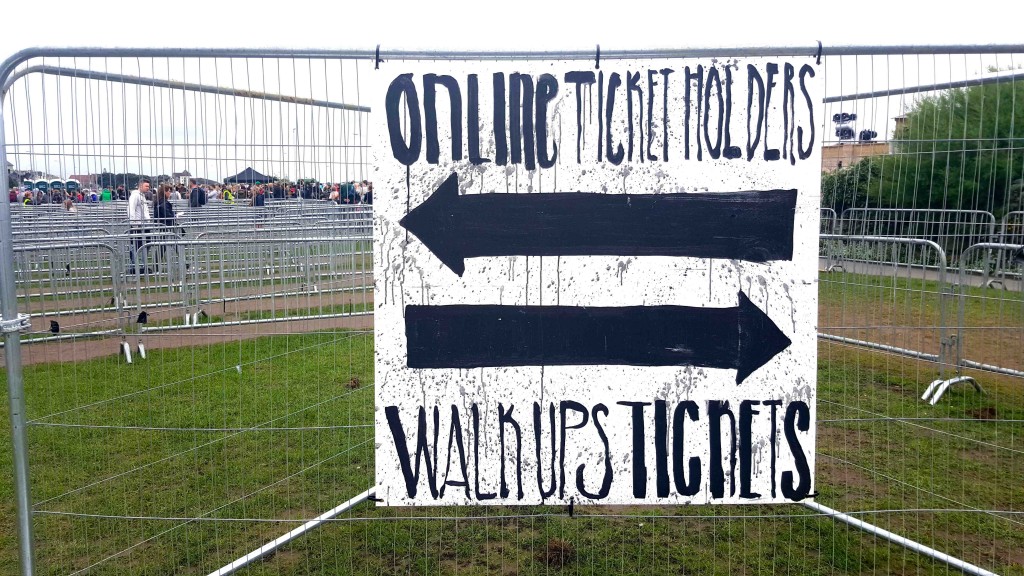 Sunday afternoon we arrived, happy to have made it, and very curious to see what Banksy and friends had prepared for us. The cue was impressive but the crowd was not as we expected. No fancy rich art people, but a fun mix of locals, families with kids, street art fans and some lucky Japanese hipsters who made the trip. 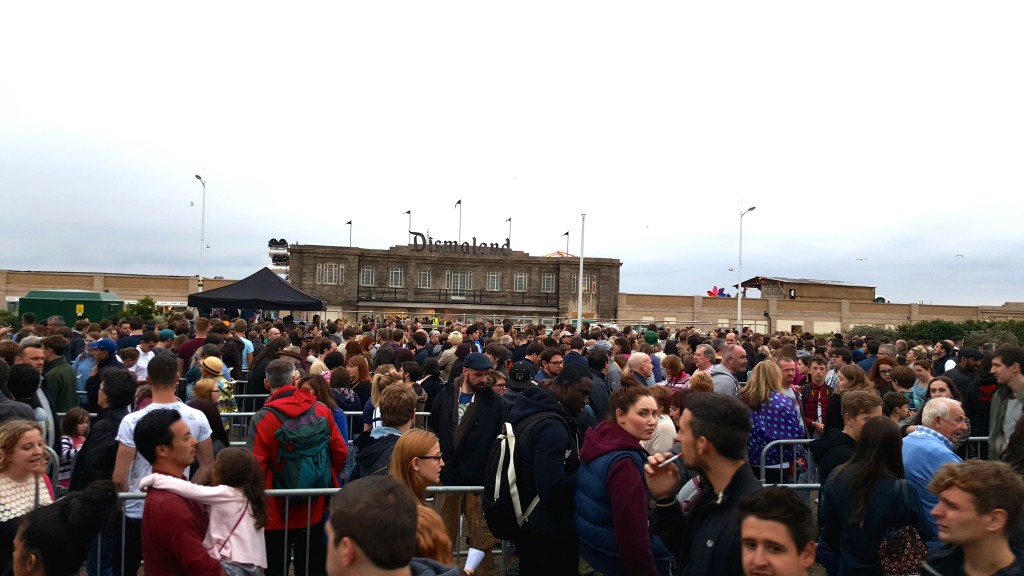 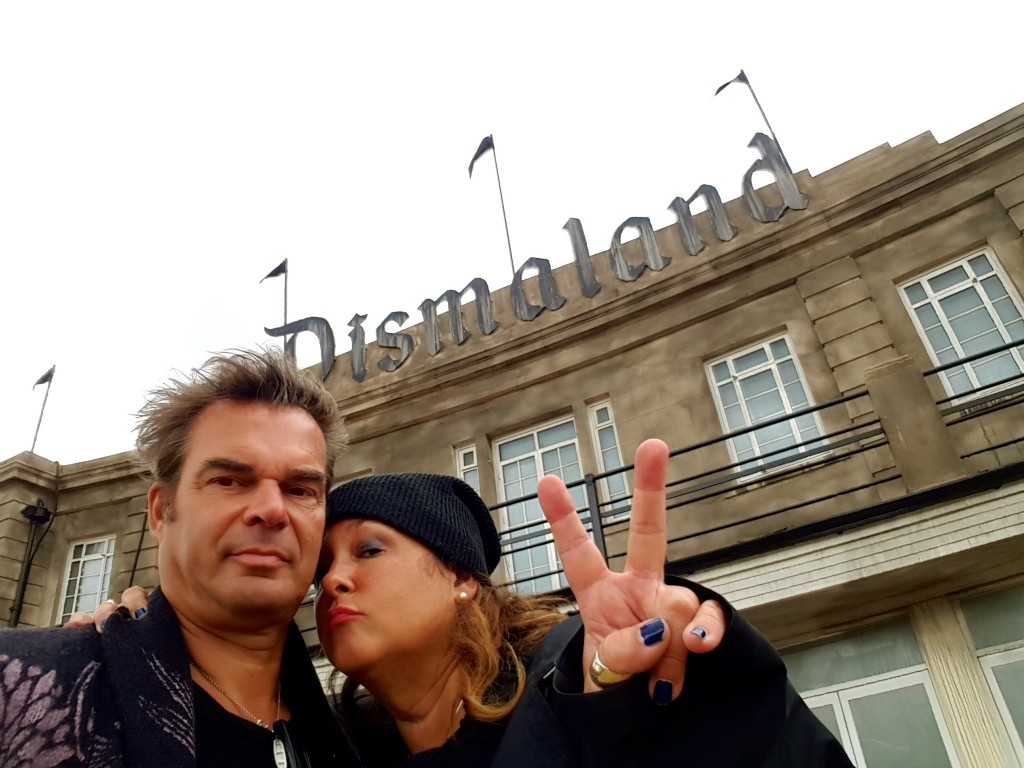 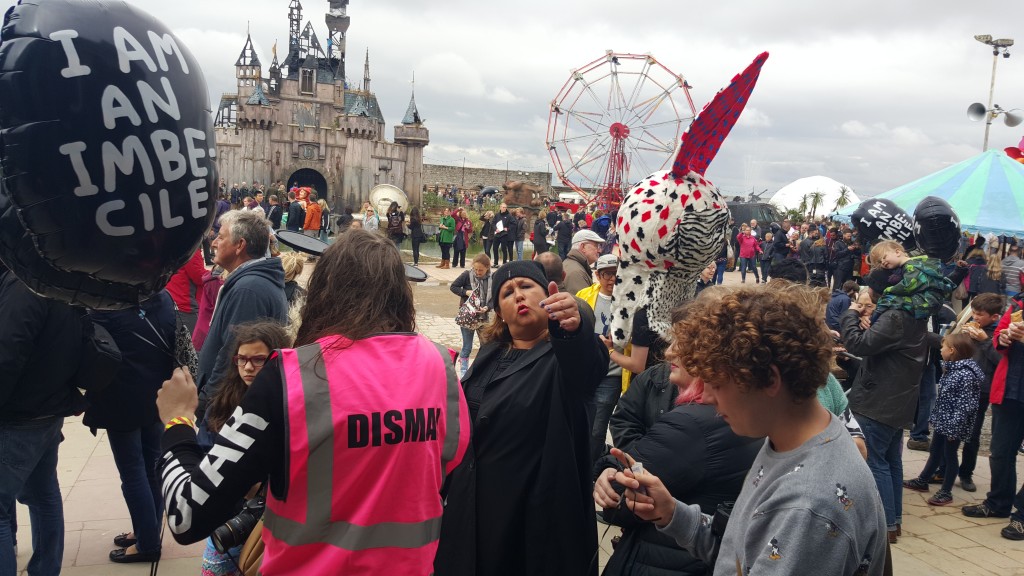 The week before journey we followed the different Dismaland Instagram/Twitter and FB posts and the explosion of pictures on Banksy’s park was overwhelming. Although newspapers were initially asked not to report details, not to “spoil the surprise.” Hélas!

I stopped watching but I can tell you, all the pictures can’t compete with what you really see, feel and hear, once you’re facing the entrance of Dismaland live. 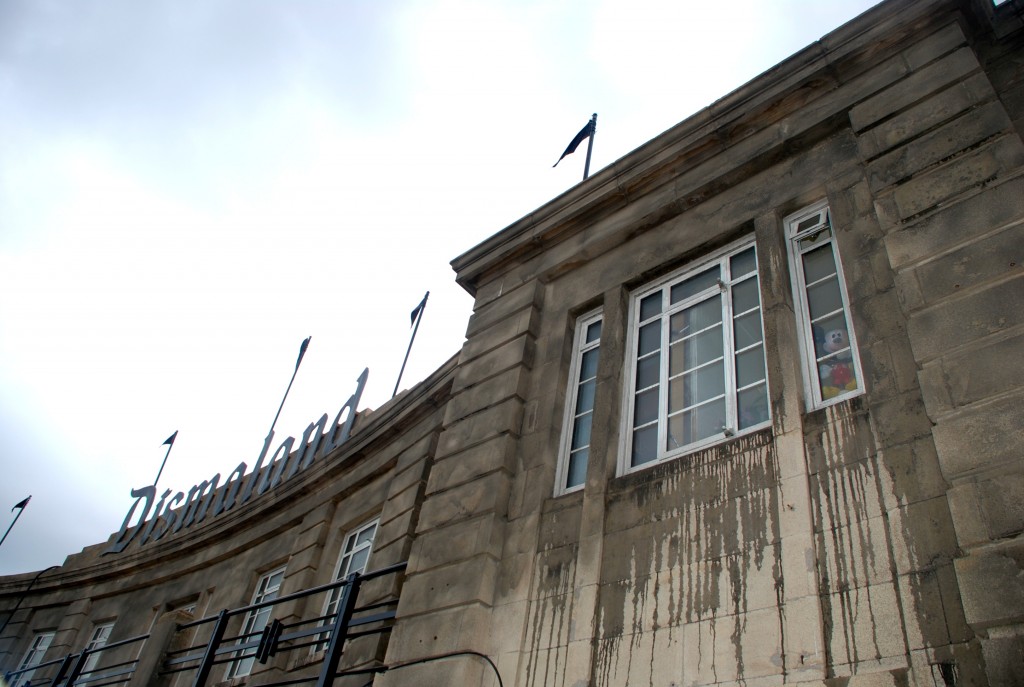 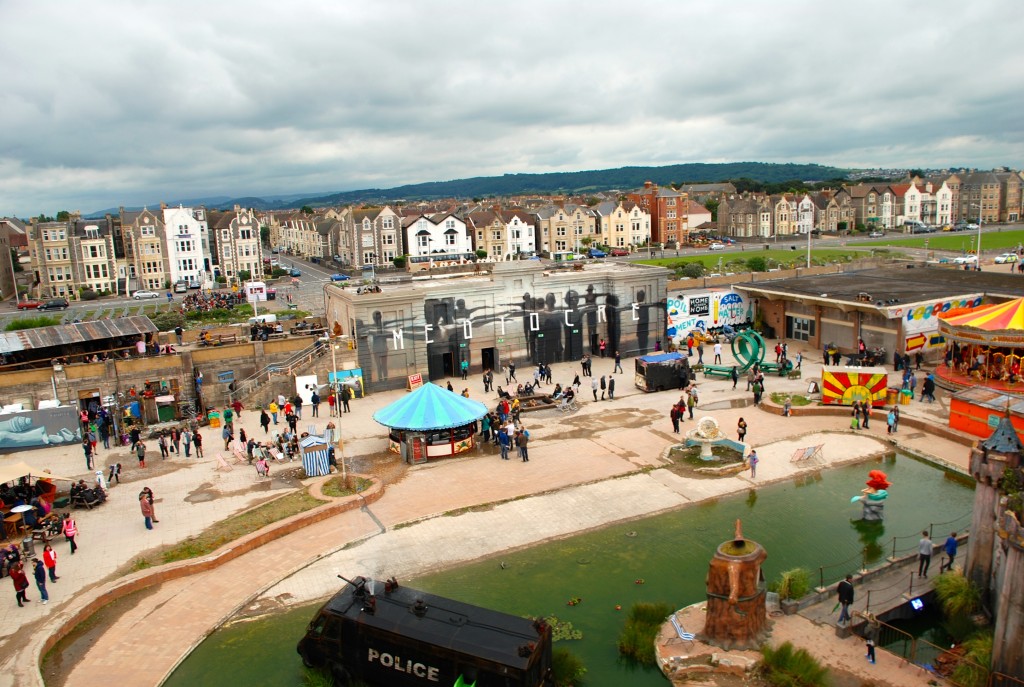 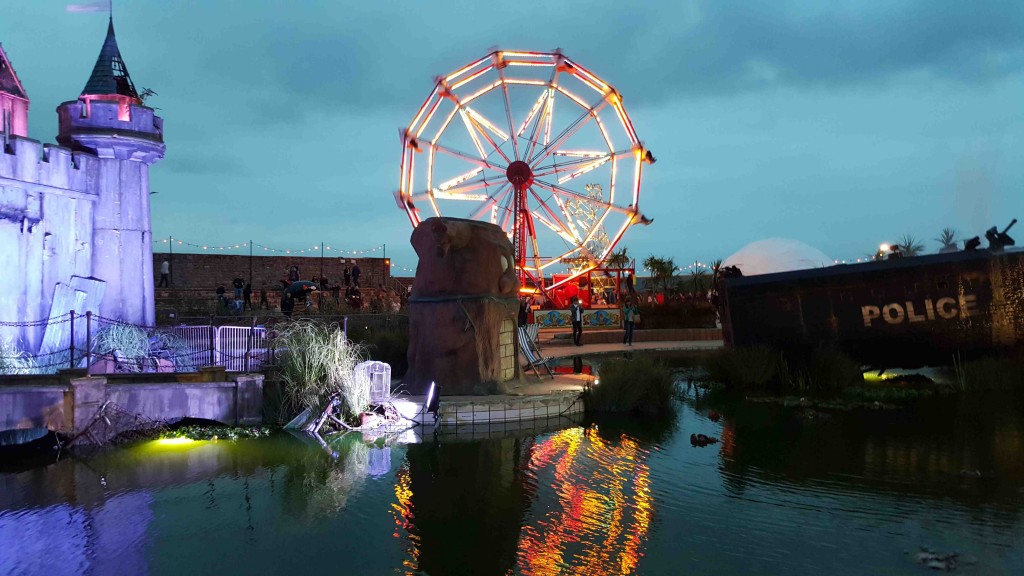 Dismaland is a temporary art project organized and curated by world famous street artist Banksy, constructed in a seaside resort town called Weston-Super-Mare, near Bristol in Somerset (UK). The entire park was prepared in secret, in a disused, worn-out lido formerly known as The Tropicana or for the locals ‘The Pool’. (When opened in 1937, this 2.5-acre seafront site, it contained the largest open air swimming pool and the highest diving board in Europe) It is closed since 2000. 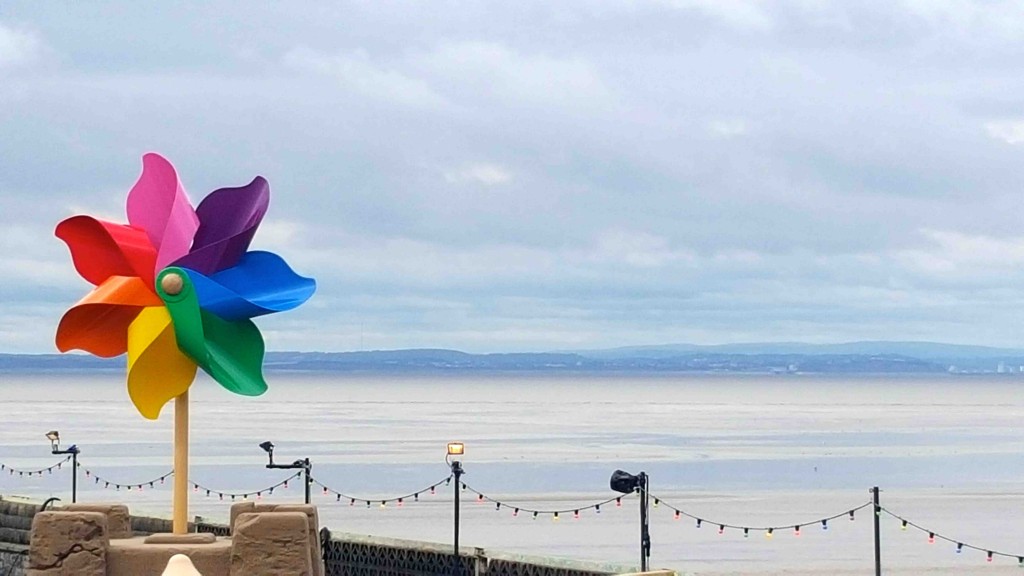 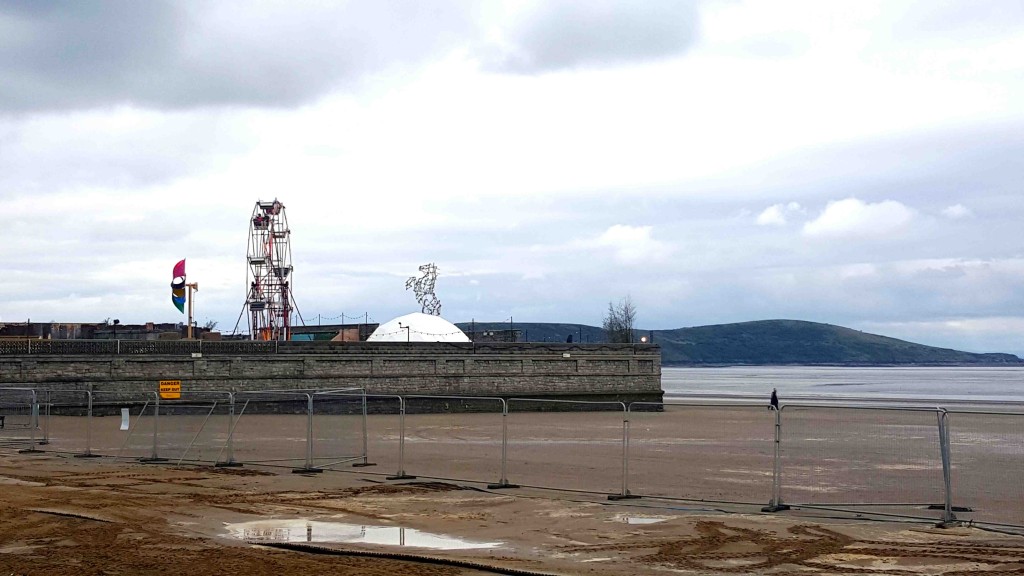 Dismaland, Bemusement Park opened the weekend of 21 August 2015 for only 5 weeks, and is scheduled to run until 27 September 2015. There are 4,000 tickets available for purchase per day, for 36 days.

It’s Bansky’s biggest project so far. The build took about 6 months, and locals were told that a Hollywood company called Atlas Entertainment was using the location to film a crime thriller called Grey Fox.

Banksy created 10 new works funded the build of the exhibition himself and invited 58 other artists to participate. Think renowned ones like Damien Hirst, Jenny Holzer, Jimmy Cauty, Bill Barminski, Caitlin Cherry, Polly Morgan, Josh Keyes, Mike Ross, David Shrigley, Bäst and Espo.
But, so much more exciting, what is Dismaland like when you experience it yourself?

Well, some call it a dystopian theme park. Or a sarcastic take on consumerism and amusement and others a pop-up art exhibition in the form of an apocalyptic park. Banksy himself described it as a “family theme park unsuitable for children.” 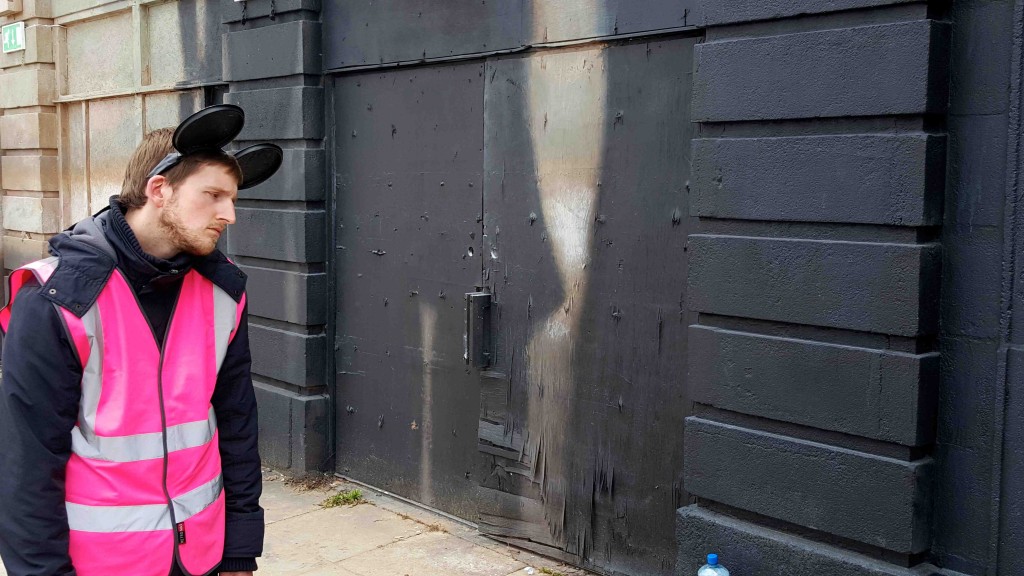 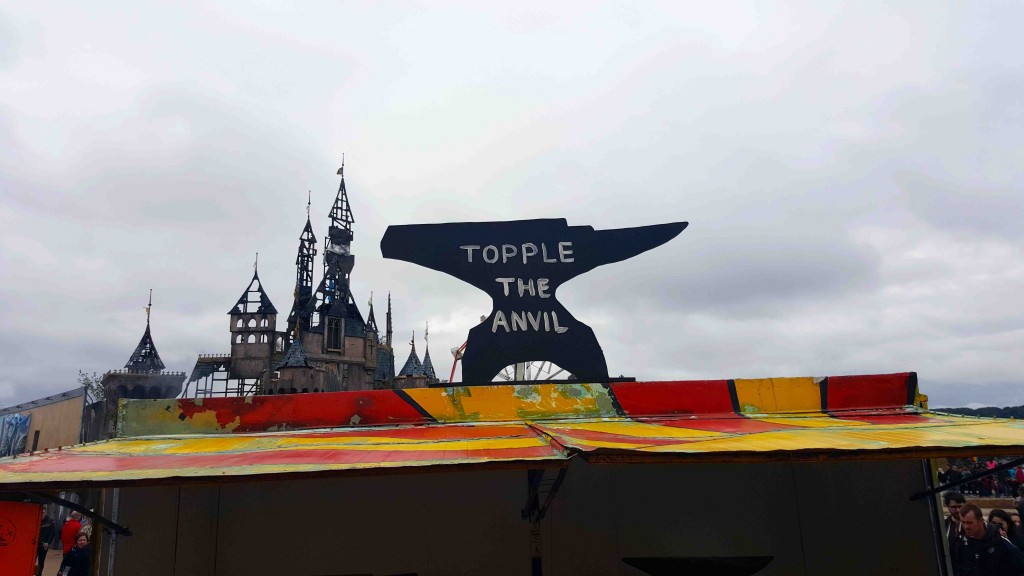 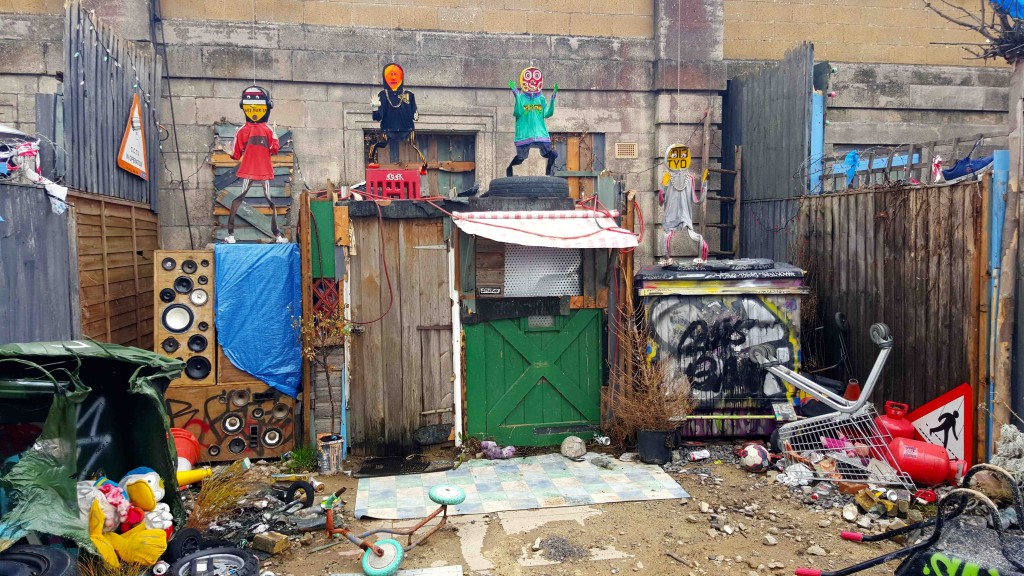 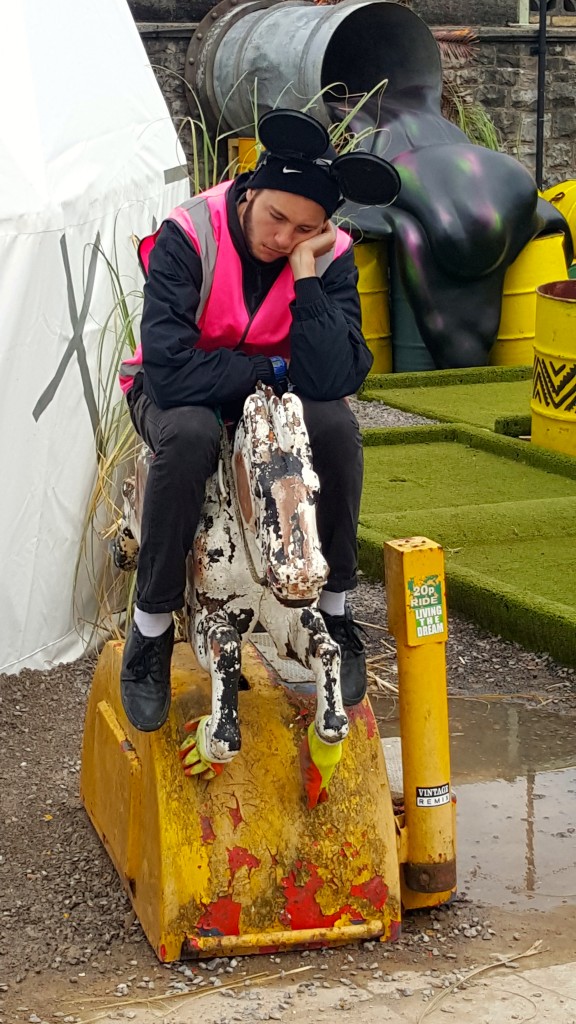 For me it was brilliant, poetic and very British. The level of sarcasm in one place is exceptional and liberating. Dismaland is an art show (with bar & cinema) disguised as a theme park, a theatre play on a destroyed concrete set where total despair is a common theme. It shouts, “another world is possible” at every turn. The park is maybe rather emboldening than depressing but that’s the idea. It’s a message for the next generation.

50 artists, 17 different countries, who all toil under the darkening clouds of the world at a created fairground that embraces brutality and low level of criminality. Banksy invites people to consider, not just consume. To look, not just spectate and most important of all, to beware of uneven floor surfaces. 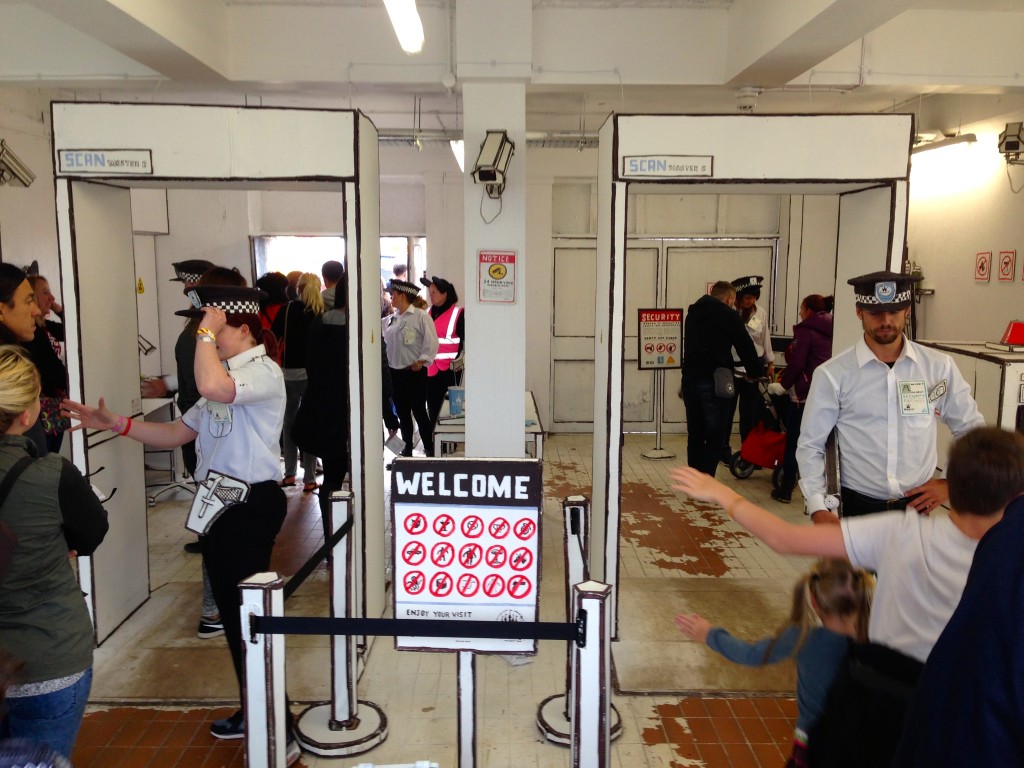 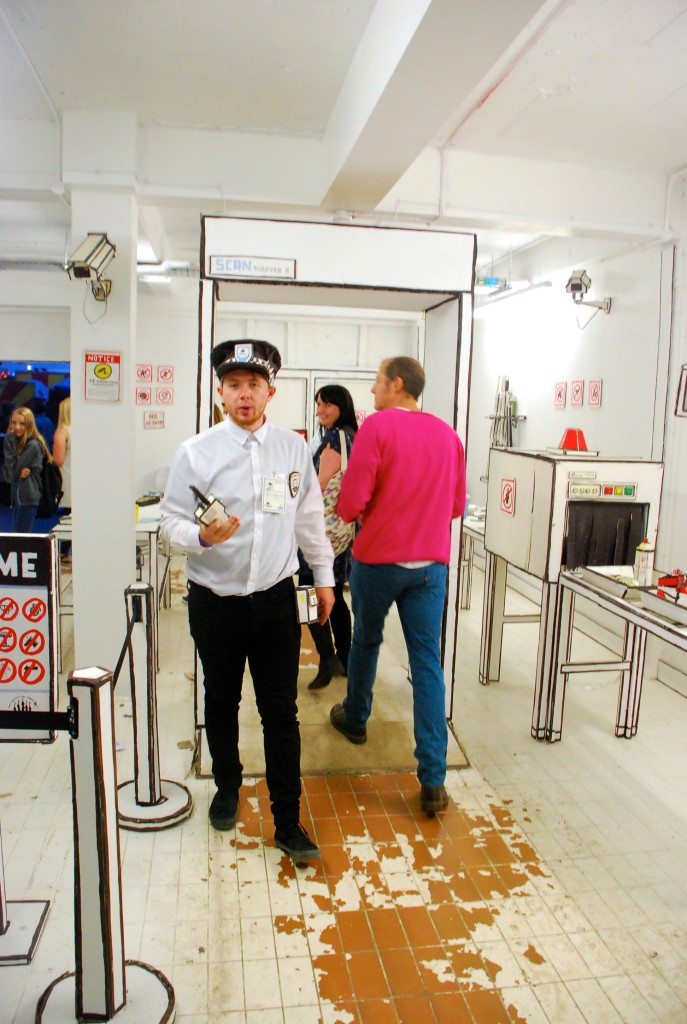 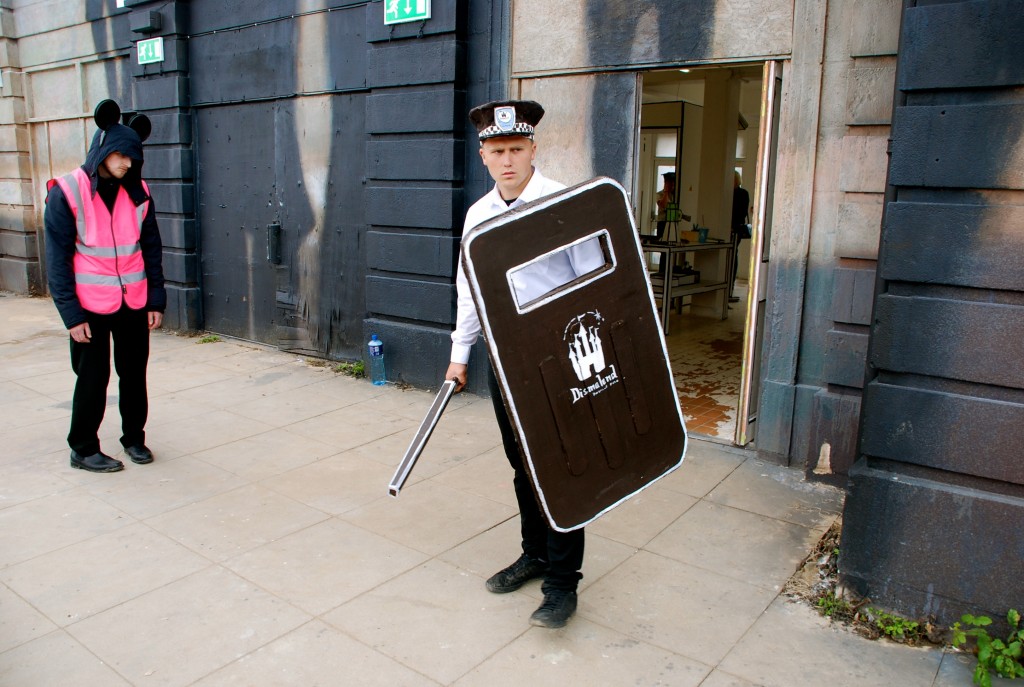 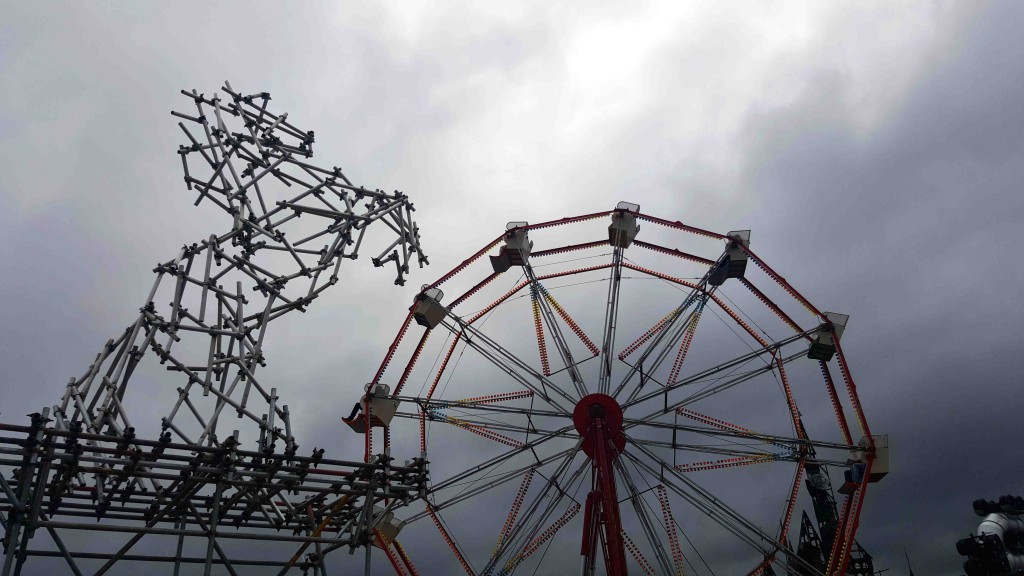 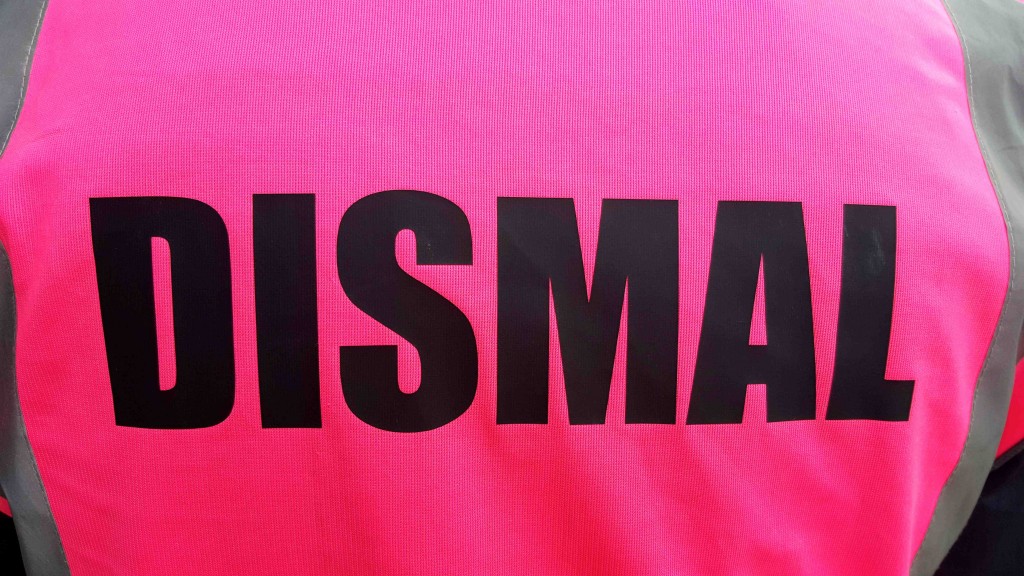 Dismaland from Alex Jefferis on Vimeo.

Free for the under 5 year. £3 on the door (subject to availability), or visit the ticket page and book a time slot for guaranteed entry.
All images courtesy of Kate Stockman & Ivan Missinne for_The Squid stories